The day our lives got turned upside down 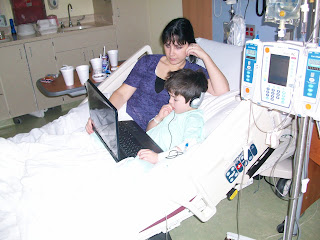 The MRI came back normal too, again with an abnormality in the same spot. The neurologist has decided to call in an ENT (ear, nose and throat). We had to decide at this point if we want to keep Aiden on anti-seizure meds..we decided..yes we do, there was an 80% chance he could have another if we decided not to keep him on it. That is way to high for me and Robbie. We NEVER want to see that again. We saw the ENT Friday night and he was not too concerned with what he saw, but we would be getting another CT in the next week..it ended up being cholesterol something..I always forget the rest of the word, but The Dr. is not too concerned still..he will be getting an MRI in 6 months to check it again. No this has nothing to do with the seizure, it's just something they found. We left the Hospital Jan. 15th, 2011. I was not sure if I wanted to start a blog, but people that are closest to me talked me into it, telling me this could be my outlet. Our lives since that morning of January 12th have been crazy...appt after appt and in the mix of all this Aiden got pneumonia. He is doing great though..he is our little trooper. My family is my whole world..I hope this did not make you cry too much..I cryed while typing it. I will always relive it in my memories..it's like it just happened. Hopfully my next post will be more uplifting ;)
Posted by CoCo at 11:55 AM 6 comments:

CoCo
I am a Mama to two Beautiful boys. I have been with my husband for 20 years and we have been married for 14 years. He is my world. I take a Ridiculous amount of pictures, but Hey that's just Me:) I love to laugh..love to laugh soooo hard it makes you cry. I truly believe things happen for a reason. My boys make me Smile every day, even when they are being boogers.

You can also find me here